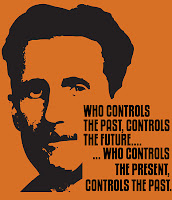 "Much of what goes by the name of pleasure is simply an effort to destroy consciousness."

If one started by asking, what is man? What are his needs? How can he best express himself? One would discover that merely having the power to avoid work and live one's life from birth to death in electric light and to the tune of tinned music is not a reason for doing so. Man needs warmth, society, leisure, comfort and security: he also needs solitude, creative work and the sense of wonder. If he recognised this he could use the products of science and industrialism eclectically, applying always the same test: does this make me more human or less human? He would then learn that the highest happiness does not lie in relaxing, resting, playing poker, drinking and making love simultaneously. [ ...] For man only stays human by preserving large patches of simplicity in his life, while the tendency of many modern inventions-in particular the film, the radio and the aeroplane-is to weaken his consciousness, dull his curiosity, and, in general, drive him nearer to the animals.

Orwell was, to say the least, ahead of his time. He decried the corruption and hypocrisy of communism, correctly predicted the advent of the technocratic police state, and in this brief treatise identifies much of our leisure objects as pacifiers and stunters of humanity.

Do your hobbies and pastimes make you more human, or less human?


Read More: Has Your Lifestyle Been Designed?